A thing about being in a shoot out* 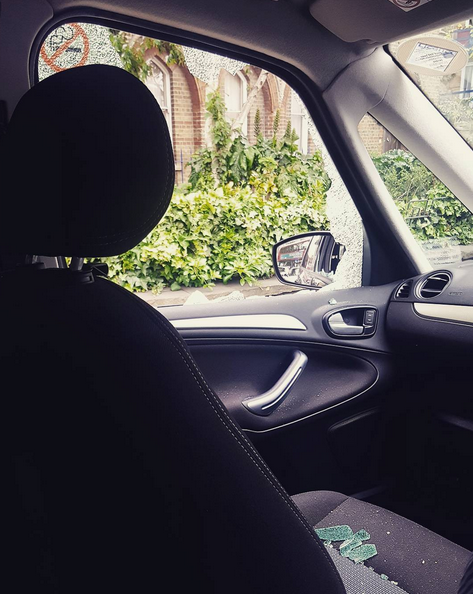 So off I went to Clapton for a photo shoot. It’s in north east London to save you the trouble of googling it like I had to. There is a trendy studio there and I went along to interview someone who has to stay top secret.

I got a cab because otherwise it appeared to be the sort of journey which would take DAYS on foot and involve me parcelling up a handkerchief of food and dangling it on the end of a stick over my shoulder in the manner of Dick Whittington.

My driver was a chirpy fellow but he drove nervously, like he was on safari in north London and wasn’t sure what might spring out at us at any moment. We turned off Upper Street at one point and crawled down the road to find it was a dead end. No matter, he reversed into a parking space and pulled out again, only to side-swipe an enormous bollard which dented the left side of the car and entirely shattered the front window. ‘My god!’ he cried, throwing his hands in the air as if in a Pentecostal church.

‘No no.’ He shook his head. ‘I will get you there.’ And so suddenly we took off, roaring through the streets of London, bits of shattered glass continually falling from the broken window giving them impression we’d been involved in some sort of drugs shoot out. People stared at bus stops. A black taxi driver pulled up and whistled at it. ‘I bet that was a cyclist, wasn’t it mate?’ he said to my driver, menacingly. ‘It was, WASN’T IT?’

While I was in the back being carted along like a hostage, wind and shards of glass whistling through my hair, I decided the only thing to do was put on my headphones and listen to Spotify. And I made quite a momentous discovery. Did you know that every single ‘Now That’s What I Call Music’ is on Spotify? ALL OF THEM EVER.

Now 34 was the first CD I ever owned, bought for me by my mum in 1996 from Woolworths in High Wycombe on the day that I went to boarding school. Wannabe by the Spice Girls is the first track on it. I remember that vividly because I played it on my dormitory every morning at 7.15 when we were woken by our matron. I was in something called ‘F Dorm’, which sounds like a prison block and was only slightly more cheerful. There were seven of us in total, all aged 11 and all sweetly thrilled to wake up to the same Spice Girls track. It quite literally never got boring.

(Although even this wasn’t as tragic as the time, a couple of years later, that our matron confiscated my CD player because I was in another dormitory where we were going through a ‘Titanic’ phase and going to sleep every night with Celine Dion’s My Heart Will Go On on repeat. You know, the version with Kate Winslet and Leo DiCaprio talking their way through it.)

Anyway. Point being, if you need a soothing trip down memory lane while driving in a getaway car, then Spotify has just the thing. The Spice Girls, Peter Andre, Gina G, Robert Miles, Oasis and so on. I arrived at the photo shoot in excellent spirits as, oddly enough, did my driver.

‘No no, it will be fine,’ he said, beaming at me. ‘At least I’ve got all the other windows.’ And off he went, laughing at his own joke.