People who insist on telling you all about their dream last night are deeply tiresome but this was a corker.

I dreamt I was four months pregnant and…wait for it…the father was Philip Green son’s Brandon.

Look, here is a picture of my baby daddy hanging out with his own dad and Kate Moss at a Topshop fashion show. He’s the one who looks about 11 on the right. 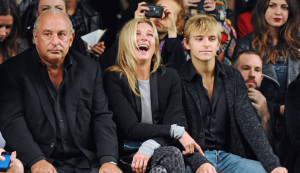 I say I was four months pregnant. I could have been three. It wasn’t terribly clear, a bit like those nitwits you see on the front of women’s magazines saying ‘I went to the loo and this baby just fell out!’

Anyway, in my dream I rang my colleague Annabel and was crying so much I couldn’t actually get the words out. Then I actually woke up crying, my pillow drenched. These were not tears of joy.

Who knows where that came from (possibly because my Facebook and Instagram feeds increasingly look like some sort of berserk Mothercare convention), but thankfully I woke up and all was well again. Presumably Brandon Green is waking up in Monaco or wherever pretty thrilled he’s not facing some kind of paternity battle too. I was so relieved I quite wanted to celebrate not being pregnant with a large vodka, but I went for a run instead.