I’m feeling generous so there are two of them.

1. I HATE people who grumble, but there are days when everything is profoundly irritating, aren’t there? Days when everything seems to go wrong. Days when the coffee queue in Pret is so long that you think you might violently assault the man in front of you, for instance. Or those mornings when you’ve washed and dried your hair, only to leave the house for it to start raining, and you think to yourself ‘THERE CAN’T BE A GOD BECAUSE IF THERE WAS HE WOULD BE LESS OF A GIT.’

Well, read Wave. Written by a Sri Lankan academic called Sonali Deraniyagala, it is her account of surviving the 2004 tsunami, but losing everything in it – her husband Steve, their two young sons, Vik, 5, and Malli, 7, and both her parents. The family were staying on the beach in a south-eastern stretch of Sri Lanka, packing up to return to Colombo that night when they see ‘a white, foamy wave’ approaching and try to make a run for it. Sonali is later found by rescuers, covered in mud and spinning around in confusion, her arms out like a small child trying to get dizzy, but her family are gone.

The book documents the next nine years of her life, and is an intense, painful and honest account of living with raw, madness-inducing grief. At one point, Sonali becomes obsessed with returning to the hotel to try and find scraps of their life amid the rubble, and she discovers a little green jersey that Vik had been given as a Christmas present. It was too big for him so Steve had rolled up his sleeves and told him how smart he looked. When Sonali finds it years later, yellowing under the sun, one of the sleeves is still rolled up. The detail and her memories are both astonishing and heartbreaking. It kicks those days when the coffee queue is too long into sharp perspective.

2.  Jeremy Clarke has also been a hero of mine since I was a teenager living in Scotland, when he came to stay to be chased as human quarry by my stepfather’s bloodhound pack. He wrote about this for the Telegraph, which you can read HERE.

More importantly, however, he is the Low Life columnist for the Spectator and has just published a collection of these columns in a book succinctly entitled Low Life. He opens with a story about the time he fell off the wagon with a load of builders in a pub called the Good Intent and ends up in the loo snorting coke with them. He weaves on with stories about his on-off girlfriend Sharon, experimenting with absinthe, getting nailed on various other drugs, getting pissed in an Afrikaner bar on ‘National Cleavage Day’ and the time in 2013 that he was diagnosed with prostate cancer.

‘Nearly two years later, to the disappointment of my friends, I’m still here,’ says the inside book jacket. ‘Reaching down inside my trousers to feel my testicles as I write, they are roughly the size of garden peas. The hormone treatment has caused them to wither on the vine. Otherwise I’m cheerful. In fact, I’ve never been happier, true story.’ Another reminder not to grumble, I’d say.

The last time I saw Jeremy was at a Spectator party in November where, after dinner, he rootled around in his pocket and found some MDMA. It was a Sunday night so I made my excuses and departed, which was perhaps weedy. The chance to party with Jeremy Clarke – as documented in his book – is a very fine thing indeed. 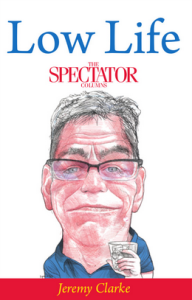 « A thing about being in Suffolk
A little wedding joke »