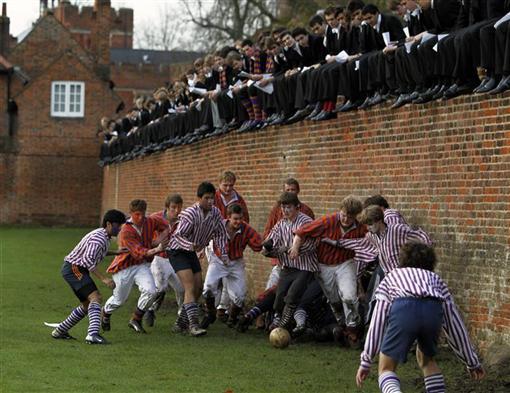 I aged seven decades in one day this week, a very unwelcome Christmas miracle. It all started when my friend Caz suggested going back to our old school for its seniors’ carol service and I agreed. Seeing as we left 16 years ago, it seemed a jolly, festive idea. I am one of those fortunate souls who actually enjoyed boarding school and remember everything apart from lacrosse and the beef cobbler with a warm sense of nostalgia. We’d have tea in the big hall with our old teachers and I’d load up on the triangular brownies I used to stuff into my cheeks like a teenage squirrel, then Caz and I would head into chapel for the service, as we did every day for seven years, and thrill at the familiar, comforting noise of 500 wicker chairs creaking together as so many girls lean forward to pray.

Well, there were no triangular brownies. That was the first blow. Then a former member of staff updated us on various changes: boarding houses had apparently become ‘hotel-like’. In a Soviet display of ruthlessness, the former headmistress had commandeered half the library to extend her private office. The old gym, full of admittedly ancient equipment like springboards and pommel horses, had become a café. A café! As if you’re meant to sit around at boarding school and discuss your boy troubles over a cappuccino. Extraordinary.

Worse came in chapel. The chairs had changed so there was no reminiscent creaking. And they seemed much too narrow for my bottom. I wondered idly whether the new, slender chairs were a response to the school’s much-increased intake (a financial move, a bit like opening two further schools in China) since they need to cram more girls into chapel. But perhaps this is too cynical and my bottom is simply wider.

Caz and I hissed at one another about slipped standards as the students traipsed in behind us. No top buttons done up. Absurd tie knots the size of apples. All sorts of earrings when we were only allowed plain hoops or studs. Mobiles in chapel. And look at the scruffy hair! Enough, I eventually whispered to her, we sound like two old land-girls carping on about how much better things were in our day. It was a depressing moment of realisation: I still felt like one of the 15-year-olds, sitting there in a stripy shirt, worrying about my physics prep, but the girls gazed through me in a withering manner normally reserved for their parents. In an entirely fictional scenario where I could afford the £40,354 annual fees, I might have a daughter among them. A few months ago I started groaning ‘ooof’ every time I sat or got into the car; this felt like another notch whittled on life’s metre-stick.

Forty grand is a gargantuan sum of cash, though. If you’re forking out so much money on your child’s education, should top buttons not be done up? I’m back to sounding like a bitter old harpy and maybe buttons don’t matter so long as your daughter is parachuted into Oxbridge. Goodness knows, girls’ boarding schools must have enough trouble these days helping their charges navigate modern neuroses and social media. Perhaps uniform matters are low on their list of priorities. Still, no brownies. It came as a hell of a shock.

On the topic of schools, Eton’s joined Instagram. I mistakenly believed the social media platform had reached peak grandeur when Nicky Haslam opened an account and started posting about tea towels but now we can follow the daily activities of the school. So far its uploads include a picture of its rowing lake (#EtonCollege) and a video of its completely unintelligible Wall Game (#WallGame) in action. At the time of writing it has 398 followers and is only following 30 others, but these include both the Duke of Cambridge and the Duke of Sussex Instagram accounts, which is quite the sort of tact one expects from an institution which has churned out so many diplomats.

Hotel thieves have gone up a gear and are now nicking five-star mattresses because they’ve got so plush, it was reported this week. For any light-fingered Sunday Telegraph readers, the mattress you really want is in the Savoy’s Royal Suite. It’s dubbed ‘the world’s most expensive mattress’ and I stayed there last year to test it because I am the sort of intrepid journalist who gets assigned such gigs. It’s a £70,000 mattress stuffed with the tummy hair of a very rare breed of Mongolian yak which supposedly makes it both as soft as Diane Abbott and a good regulator of heat since, in the Mongolian mountains, the poor old yaks have to withstand very extreme temperatures. I slept perfectly alright, no better or worse than normally I have to say. But if you can get it out of the suite that would be a trophy indeed.