THE WORLD MARMALADE FESTIVAL (AGAIN) and my column. 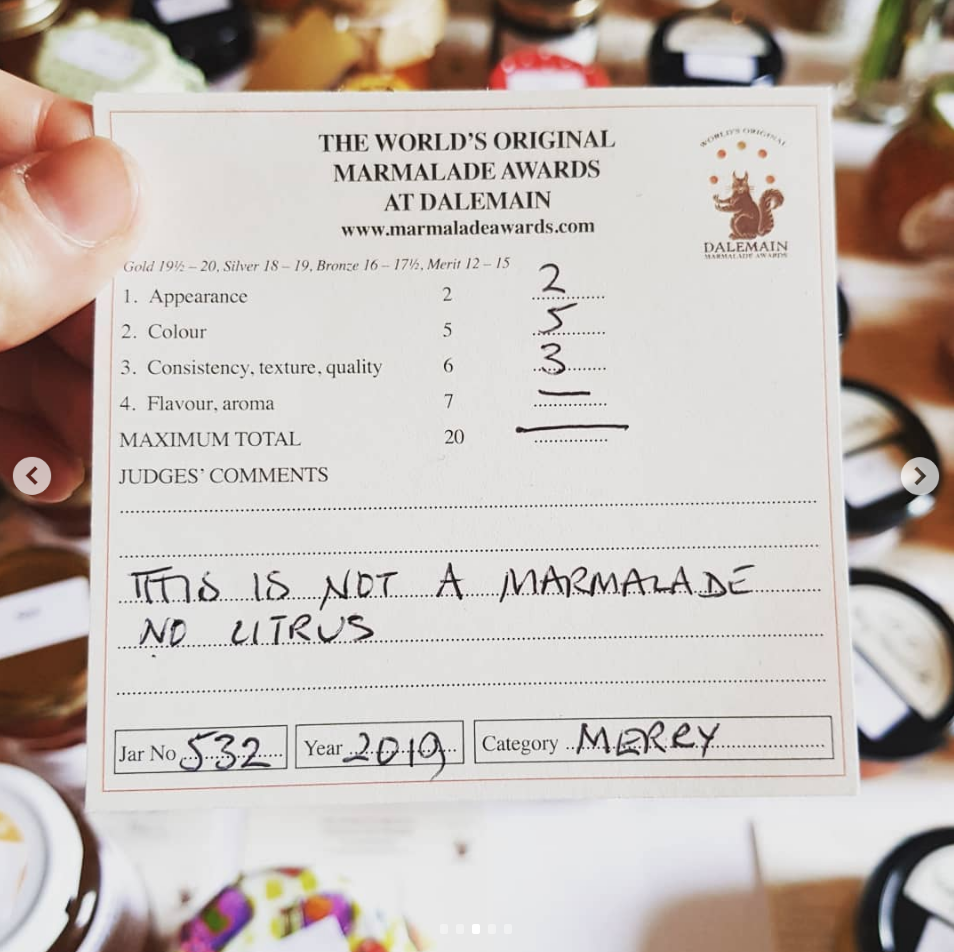 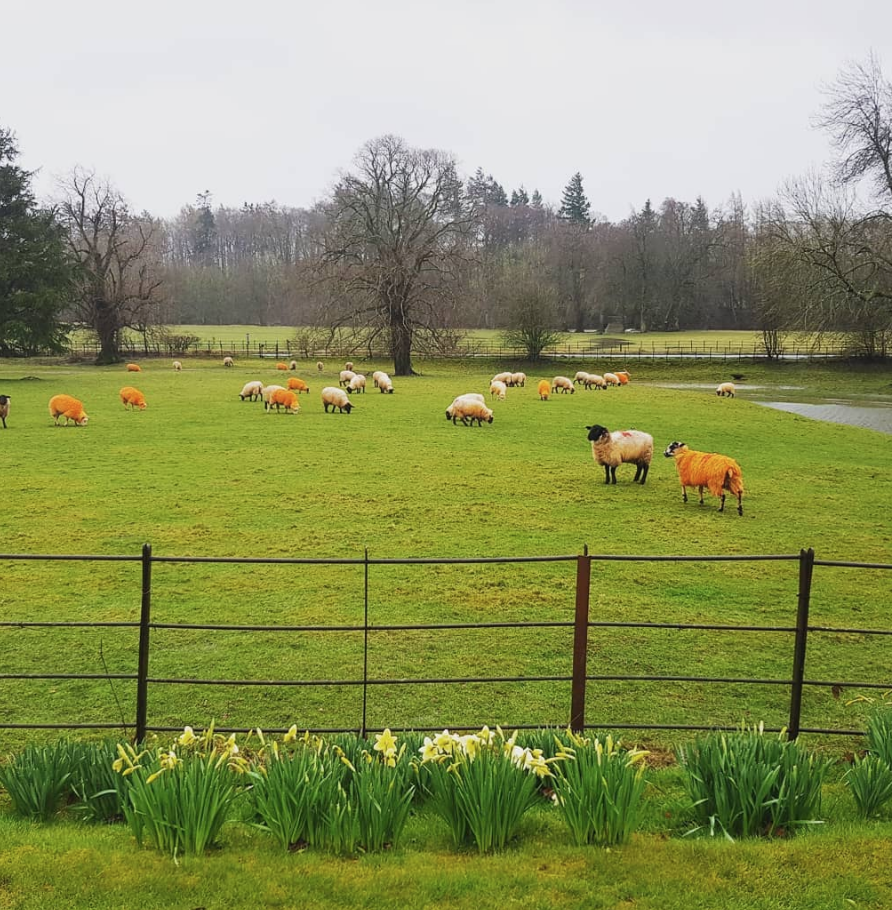 Team, just back from Cumbria. A quick flit up and down in two days because my brilliant mum won gold for two of her marmalades and silver for three others. See and definitely buy all her flavours HERE on her shiny new website. You have to email her for orders. It was the third time I’ve been and just as magical. Thousands of marmalade jars sent in from around the world, all judged by the local WI and each and every one gets a report card with comments and score. Bake Off in a jar, basically. It has that same charming, homespun appeal.

Will paste today’s Sun Tel column below and then I’ve got to go to sleep. Busy couple of days coming up as am going through the FINAL version of What Happens Now before proofs are printed and sent out next month. Gulp. I know it’s extremely dull to talk about one’s dreams but I dreamt I was pregnant last week. It happens every now and then (never any idea who the father is, my subconscious seems unconcerned about this). Sometimes I even have the baby but then put it down somewhere and forget about it. I always wake up sweaty and my hands fly to my stomach under the duvet: nope, not pregnant, just ate too much supper.

I googled what these dreams meant once and Google told me it generally relates to an anxiety about ‘giving birth’ to a forthcoming project. So I look forward to five months of clammy pregnancy dreams between now and August 8th when What Happens Now will be delivered.

Oh also, finally, if you need a new podcast have a go at The Drop Out. A true story about the rise and fall of Elizabeth Holmes, at one stage the world’s youngest, female self-made billionaire (on paper). Story HERE and my sister and I listened agog to the podcast driving up and down to Cumbria. Also, Ricky Gervais’s new series is on Netflix, called After Life. He wrote, directed and stars in the series as Tony, who’s life has been destroyed after his wife died from breast cancer. Some have grumbled that it’s just Gervais playing Gervais, or Gervais playing Brent. But if you’re not looking to pick holes and want something to watch which will make you cackle at certain moments and weep at others (‘I’d rather be nowhere with her than somewhere without her,’ laments Tony at at one point), then it’s worth a look.

‘We’d love you to be his godmother,’ said my friend Tash, while I grappled inexpertly with her new baby, trying to prevent his head lolling back between his shoulder blades like a drunk after big night. Such an honour to be charged with [a bit of] her son’s moral development, but the godparent question makes me nervous. A couple of weeks ago I threw away a pot plant that I’d failed to keep alive in my flat. I smiled back at Tash and said of course I would, though a little voice inside me was already thinking: if the worst comes to the worst, Charlie will have to bunk up with one of his other godparents and I’ll nip round every now and then to palm him a tenner.

It’s hugely flattering to be asked but modern godparenting is a minefield and – I’ve learned – another way to feel woefully inadequate. Some people are good at remembering birthdays. They presumably do something sensible like write the date down. I am less efficient. Only last weekend, I was alerted to a goddaughter’s birthday by a text from her mother asking me to her party a couple of days later. ‘Love to!’ I replied quickly, ‘then I can drop off her present.’ I panic-bought in Waterstones that afternoon.

It’s not just the presents to worry about these days, either. ‘Feel free to Instagram pictures of him,’ said Tash, during my same visit to my new godson. ‘We tell that to all the godparents.’ Yikes – the social media policy of godparenting! I hadn’t even considered that. She then ran me through her son’s other godparents so I knew who I was up against since some (less so me) treat godparenting as an Olympic sport. One rival has started a wine collection at Berry Brothers for a mutual goddaughter. What a grotesque show off, I thought when I found out, sliding a Peppa Pig sticker book across the table at her.

An alternative idea is to follow my pal Tibbs, who’s putting £10 a month into accounts for each of her godchildren until they turn 18. ‘Although now I’ve got four, it might have to become a fiver,’ muses Tibbs. Then she adds: ‘I want them to spend it all on their gap years in Thailand, taking magic mushrooms.’ Ah, I’ve found someone even less suitable to be a godparent than me.

I console myself with the thought that, although inept now, I’ll be mates with them when they’re older and potentially in greater need of support. What does yet another plastic toy really matter to a four-year-old? I’ll scoop them up when they’re weeping over bad boyfriends down the line.

This happened to me recently when I met one of my godfathers for the first time. Odd to get to 34 and never have met a godparent but there’s a reason. His brother was my father’s best friend and sadly died in a car crash shortly before I was born. The honourary role fell to his brother who lived in America at the time and now in Portugal. We met a few weeks ago when I was in Lisbon for a lunch I will remember for a long time. We talked of family, of relationships, of life’s high hopes and failed ambitions in much more uncomplicated way than I ever could discuss with my own parents and we’ve since become firm email friends. It’s something to aim for with my own godchildren: a few years of crap sticker books and the odd note shoved in an envelope, but then? Proper friendship and long lunches.

Is clapping in a plane upon landing acceptable or not? It’s always irritated me as overly cheery bonhomie that smacks of pissed stag parties. By that point, I just want to get off the plane. Also, surely it’s the captain’s job to land the plane? I don’t applaud my local barista when he hands me my coffee. It’s the sort of mobbish behaviour I imagine Nancy Mitford would have frowned at in the unlikely event she’d ever have flown EasyJet or Ryanair. But taxying to the terminal at Luton last Sunday after a weekend away, an air steward came over the tannoy: ‘I think the captain deserves a big round of applause for landing in these conditions,’ she said. So everyone did and I joined in. When you bring a plane down safely in 70mph gusts and see off Storm Gareth, I feel one should make an allowance.

There was much sniggering at this week’s photo of Europe’s chief negotiator Michel Barnier stooping to kiss Theresa May’s hand as if a Disney prince who’d just clattered into Strasbourg on his horse. ‘Inappropriate!’ screamed some on Twitter. Frankly, by this point, I’m all for a bit of medieval chivalry. A man lowering his lips towards a woman’s hand may feel outdated to the more strident among us, but I had the moves put on me in Sicily once by a couple of Italians and I have to admit being impressed by such old-fashioned courtliness. Even swooning ever so slightly. Perhaps I’m too easy (a rhetorical thought, no answers necessary), but if Barnier’s Gallic gallantry shifts us forward with these negotiations then hurrah. I only hope he took precautions and hasn’t caught the Prime Minister’s croaky throat.