So, it’s back to school for all of us. Time to buy a new pencil case, iron that shirt and go on a teary shopping trip for new school shoes. Also, shave your face. You heard me. Razor. Shaving cream. Get going. It’s September and, according to the BBC, beards are out. You too madam. All off. Sorry.

There’s always a fuss about beards at this time of year when presenters and their ilk return from holiday with hairy faces. This year, it’s Jeremy Vine and Nick Robinson who’ve skipped back to work with stubbly chins and been accused of scruffiness by BBC management, but do you remember the furore a few years back when Jeremy Paxman appeared on Newsnight with a beard? It was incredible – both the beard and the furore. A sex tape of the queen could have leaked that week and Jeremy’s face would still have been the number one item on the news.

As it happens, I was due to interview Jeremy over lunch that same week. And, as I walked out of the Tatler office, the beard trending on Twitter, my editor said she’d give me a prize if I touched it.

‘What does touching mean?’ I queried, wanting to nail down the terms. ‘If I kiss him on the cheek at the end of lunch, does that count?’

‘No,’ she said, quite firmly. ‘You have to touch it with both hands.’

So, Jeremy and I had lunch and it was while he was telling me an anecdote about the Good Friday Agreement and Tony Blair that I decided I couldn’t lean in and ask if I could stroke his face. I wimped out, but he walked me back to my office and kissed me on the cheek to say goodbye and, I have to say, although it looked spiky, the beard was soft when you rubbed up against it. A metaphor, perhaps, for the man himself.

Until recently, I’d never gone in for beards. I suspect this is because I read The Twits when little. Mr Twit’s beard, you may know, is a forest alive with leftovers like mouldy cornflakes and sardines. It put me right off. Beards looked like they’d smell and scratch your face. They looked like they may harbour nits. And then I met my boyfriend, who has a beard which does not contain any sort of food or nits and find my attitude radically changed.

We haven’t got time to go into the history of the beard but as far as I can work out it seems they were fairly big in Anglo Saxon times, popular with Stuart monarchs, sported by eminent Victorian writers and scientists who had more beard than face and have enjoyed a more recent resurgence on hipsters, which has encouraged their general distribution among 30-something men.

And yet in some, dark corners of Britain, pognophobia still lurks. Clearly there are anti-beard forces at work within the BBC. And, unless you’re head boy, poor old Etonians still aren’t allowed to grow a beard at school. I conducted a scientific survey on the topic for this column because that’s the kind of hard work I feel you deserve as a reader and the one person I consulted, a captain of industry I sat next to at a dinner party, said he’d never hire a man with a beard. ‘I wouldn’t trust him,’ he said, shaking his head as if I’d asked him whether he’d employ someone freshly sprung from pokey.

Enough, I say. Down with such discrimination, when we have resplendently beardy sorts like cricketer Moeen Ali and, er, Prince Harry as modern-day poster boys. For surely, given that women have reclaimed their right to have hair on their bits we should allow men the same privilege? Discrimination, otherwise. If you want to have a beard, have a beard. Go on holiday and grow something that would embarrass Father Christmas. I could feel the tickle of Jeremy Paxman’s beard on my cheek long after he’d walked me back to my office. And if that’s not a ringing endorsement I don’t know what is. 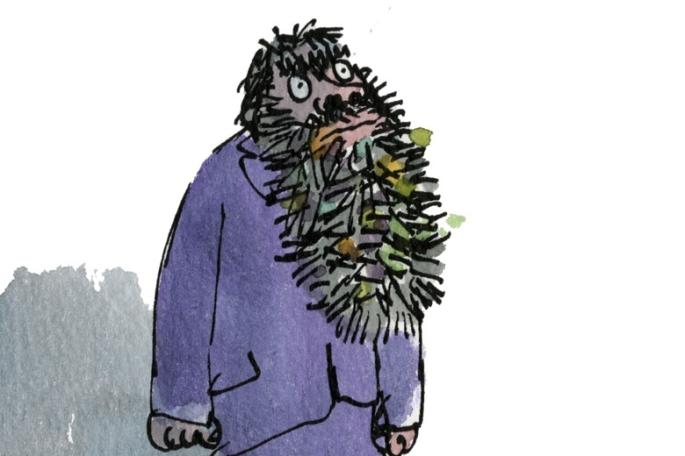