A thing about mountains

Right, sorry I’ve been away so I haven’t been fully concentrating on this site. And also, just as an fyi, I’m being quite lazy about updating here because I’m now at 81,000 words of my book and am trying to concentrate on making terrible jokes in that instead of terrible jokes on my website. Rest assured, I haven’t given up on terrible jokes, I’m just trying to spread the terrible-ness out a bit.

Anyway, I’ve just spent a v happy and restful six days in northern Spain where my dad and step-mother live. I say restful but there was the odd flurry of activity. Dad decided in advance that he and I, plus a couple of my friends who came out with me, would climb one of the biggest Pyrenees. Canigou, it’s called. Pronounced canny-goo. And it’s nearly 3,000 metres.

I was nervous about this because the last time I tried to climb a mountain with my dad was a disaster. It was in Tanzania when I was 18 and we went off to climb Kilimanjaro. Now, Dad is unbelievably athletic. He rowed for Oxford and then for Britain. In 2005 he sailed the Atlantic solo (you can buy his EXCELLENT book HERE). Like a wolfhound, he is happiest bounding around outside. I, meanwhile, was a bit of a pudding aged 18. But never mind that. Cheryl Cole (I can’t be bothered to google whatever her name is now) got up Kilimanjaro, right? No big deal.

So. On the first night of the expedition, staying in a hotel in the foothills of Kilimanjaro, we listened politely to a lecture about our ascent which was to start the next day. We would lose toenails, the guide said solemnly. We would wake at midnight for the final push and walk for between four and six hours, he added, vomitting and probably shitting ourselves up a steep slope in pitch black. This was news to me as I’d previously thought it was a bit of a stroll with a pleasant view of Africa from the top.

Duly chastened, I went through to supper afterwards feeling shaky. Plus, I had started taking diamox (a drug used to combat altitude sickness) that day. And it was while eating a bowl of soup that I started feeling worse. A bit sick. Like I needed to get to the bathroom immediately. ‘Dad, I’m just going to the loo,’ I remember saying, standing up from the table. And I don’t remember much after that. I’d fainted in the middle of the restaurant and toppled over, cracking my head on the side of table as I went down. Apparently other women in the restaurant shrieked, and I am annoyed I missed this because I quite love a drama.

‘Oh my gaaaaad,’ American Doctor Number One said. ‘It’s so close to her eye, she might lose it.’

‘Oh my gaaaaad,’ said American Doctor Number Two. ‘If she gets an infection it’ll go straight to her brain.’

The American doctors, although exceptional at describing in graphic detail what could possibly happen to me and my brain, were less exceptional at solving the problem. Scared of being sued, they declared they couldn’t help and that I had to go straight to hospital. And, just to recap, we were in Tanzania, about an hour from the nearest hospital.

We got in a minbus and speed towards Arusha. I was being sick by this point and, every tie I threw up, blood would spurt from my open eye socket with the effort. Sorry, but it’s the sort of detail you need. ‘Dad, I can’t see,’ I said at one point, not realising it was because there was so much blood in my eye that blinking had become sticky work.

Eventually, we got to the hospital and I lie on a ferociously stained bed which had quite possibly been in use since the Tanzanian conflict with Uganda in the 70s. Maybe longer. Dad took a picture of me at this point. Here it is. Not my best angle, I admit, but you can see straight inside my head.

It was all fine though, because in the end an eye doctor was called and he did a neat job of stitching it up. Two layers of stitching in fact. And I went round for the next two weeks looking like a character from a Guy Ritchie film, thrilled at the changing colour of my bruise. Dad and I didn’t go up Kilimanjaro in the end, but we had a very bonding time walking other parts of Tanzania and getting half way up and down the bloody mountain in one day just to prove it didn’t *totally* beat us. You can still see a scar running around the outside of my left eye now and I love it.

This is why I was a bit nervous about revisiting a mountain with Dad. ‘Nobody gets vertigo, do they?’ he asked, before setting off last week. Nope, my friends and I didn’t think we did. ‘Good,’ said Dad, ‘because there’s a bit of a narrow scree slope for the last bit.’

It looked fairly ominous from the ground. See below. It’s the one in the middle. Quite sheer. 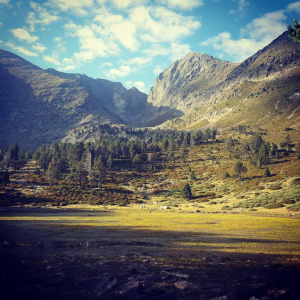 Actually, it was sublime. A couple of hours scrabbling up in the sunshine, about half an hour on the top taking selfies, a couple of hours down again. Go early if you want to do it because we passed dozens of people heading up on the way down. And you don’t want your picture at the top spoiled by other people. Although we weren’t totally alone at the top, because someone had thoughtfully done a little turd, covered it with tissue paper and then put a small rock on it.

But don’t let that put you off, because at the top of Canigou you’re above the clouds and the views are sensational. Across southern France, into northern Spain and out to the Mediterranean on a clear day. And you don’t have to be super fit either because you can park at 2,000 metres and head up from there. I suppose really the thing to do is just have a little think first about whether you’re prone to fainting before tackling it. Or any other mountains, come to that.