A thing about my mathematical abilities 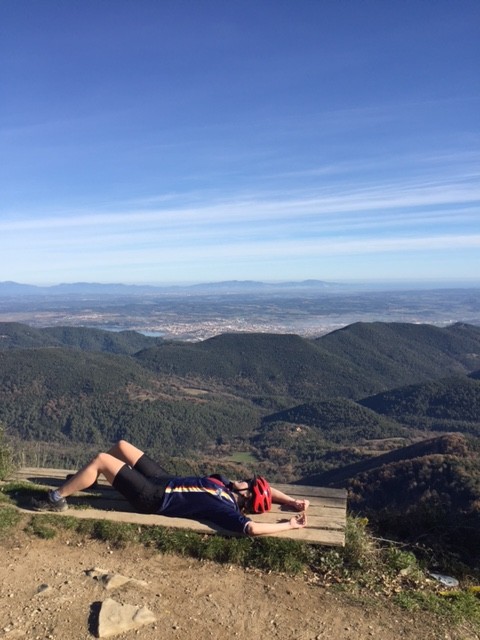 I was never good at maths. In lessons at school, I used the plastic edge of my protractor to clean under my nails. This is why a 16 percent gradient on a hill wasn’t something that I understood until recently. Or any gradient, frankly. Flattish? Steepish? Not a clue. Where’s that protractor? I’ve got Christmas cake underneath my nails again.

The reason I mention it is that I cycled up a hill with a 16 percent incline a few days ago. And I’m now much clearer about what that means. It means, basically, that it isn’t a hill at all. It is a cliff, a near vertical cliff of the sort that only nimble mountain goats would be silly enough to tackle.

The cliff in question is technically a mountain in Catalunya (northern Spain, for those who paid even less attention in geography than I did in maths), called Rocacorba. It’s a famous mountain among the local biking fraternity, with a tarmacked road which weaves past pine trees and yellow stone farmhouses right up to 970m, with a view that looks out towards the Mediterranean. Click HERE if you want a more professional analysis on the climb from the bike nerds at Cycling Weekly.

‘I might do Rocacorba tomorrow, do you fancy it?’ said my 61-year-old father, over the holidays. He lives out there. He is into cycling. He has done this mountain 16 times in the past few years – taking anywhere between 54 minutes and just over an hour to get up it.

At the precise moment Dad asked this, I was eating my 53rd bit of York ham, smeared with mayonnaise, for supper.

‘Thing is I’ve got to pack because we’re going tomorrow afternoon.’ My fork and the York ham had paused mid-air.

‘Go on then,’ I said. ‘Why not?’ I immediately went into carb-loading mode and ate three slices of almond cake for pudding.

Off we went the following morning – Dad, my brother-in-law and me. I borrowed a pair of padded lycra shorts which made me feel like I was wearing the world’s thickest, most absorbent incontinence pad. Maybe cyclists are into that. Weirdos.

The first bit was alright. It was a clear, crisp morning. I cycled past a few Spaniards picking mushrooms with a basket and gave them a wave.

And then it just got steeper, and steeper. So steep that at one point, between breaths, I melodramatically muttered a line from King Lear to myself: ‘The worst is not so long as we can say ‘This is the worst.” What kind of wanker quotes Shakespeare while cycling up a hill?

Anyway, long story short, I got there in just over an hour. Lungs heaving, legs shaking. Dad arrived shortly after me. ‘The marvellous thing is I was never out of breath,’ he said. Git.

The view runs for miles. Dozens of miles out to the sea. We quickly took 500 photographs of ourselves and then jumped back on to race down again. Once we’d got home, I celebrated with a light lunch of carbonara and Vacherin on crusty bread.

So the moral of the story, chaps, is pay more attention in maths.