A thing about why you should be watching Happy Valley

I’m a week overdue with this but I’ve been away for a few days and only just caught up with the first two episodes of the second series of Happy Valley, the BBC drama about the least happy valley in Britain. If you didn’t see the first series in 2014, then you need to watch that before the second one, as is traditional. Does that make sense? Not sure. I’m quite tired. Anyway, here’s the deal.

It stars James Norton, who is woof even in prison.

Although he is a bit sad in this series. 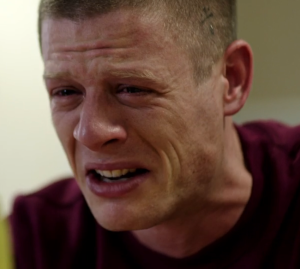 Don’t be sad, James. (And why is that lady from Bridget Jones’s Diary touching you?)

It also stars the magnificent Sarah Lancashire, bossing it all over again as police sergeant Catherine Cawood.

Also, slightly weirdly, Mr Moleseley off of Downton and you get to see his bottom.

Quite a lot of it.

It’s also worth noting that Mr Moleseley is apparently now married to Hayley off of Coronation Street.

And that this series also features Neville Longbottom from Harry Potter.

Although mostly it just seems to be about James being sad.

Maybe he’s been watching too much Homeland in prison.