Wearing hats in the airport

Off to Magaluf for a few days

It’s the season for wearing hats in the airport, which I have a peculiar dislike of. Straw hats, floppy brimmed hats, panamas and so on. ‘YOU’RE NOT ON THE BEACH YET, YOU EAGER TOSSERS,’ I want to shout at them all.

And then this weekend I went to Scotland for a few days, and I wore one of my own hats through the airport, tweeting my embarrassment in a sort of attempt to assuage the shame. (And also because I sensed the opportunity to crack a social media gag.)

Anyway, seconds later, someone on Twitter pointed out that the Sunday Times writer Bryan Appleyard had just tweeted a picture of Norman Parkinson’s wife wearing a safari hat through Nairobi Airport in 1951. This eagle-eyed observer then took a screenshot of the neat juxtaposition, which tickled me a LOT. 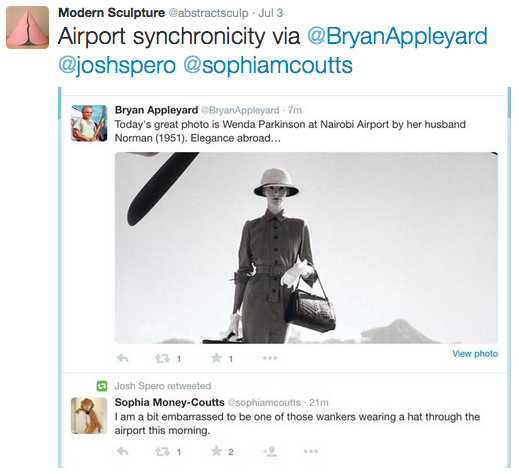